Every so often, I get the opportunity to act as a “drum tech” for my drum teacher and his band, Run Devil Run. This is a great deal of fun because I get to hang backstage and watch band interactions with bands that are at a higher level than anyone I’ve ever played with. I’ll share some of these behind-the-scene details with all of you. My task as a drum tech is pretty simple; I must help get the drums set up and torn down as quickly as possible. Dave doesn’t have some crazy Neil Peart-sized kit, so this isn’t rocket science. That’s usually the end of my responsibility. Only once have I had to run out mid-set (to give Dave a drum key at the House of Blues). My final task, and perhaps the most important, is to keep Dave conscious with a constant stream of Red Bulls. 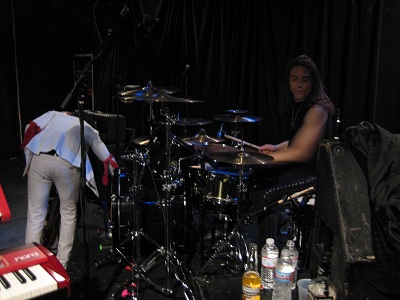 Dave doing his microphone level check before the curtains open.

So, I have it pretty easy (unlike the guitar tech who actually has stuff to do during the set). This leaves me with plenty of time to stand around and judge people. My findings are: 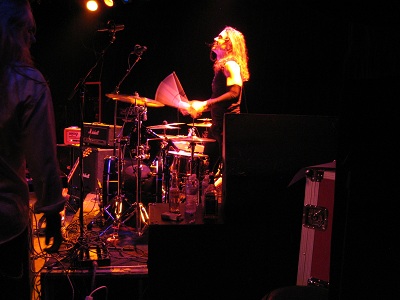 Dave rocking it up!

The show went pretty damn well. Run Devil Run appeared to be the most popular band of the evening, but they weren’t the last to go on. When the curtains closed, there was an encore chant. This was one of those situations where the band really had no plans to do an encore. There was a hurried negotiation with the stage manager to deliver the encore the crowd was calling for. Then there was an even more hurried decision between band members as to which song they were going go out with. It’s refreshing to see an encore performance that was genuine (unplanned). 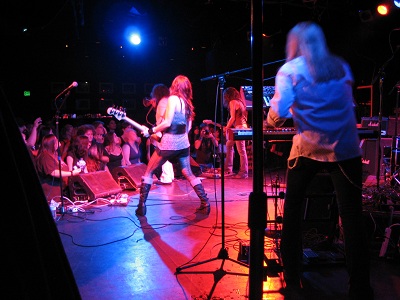 The rest of the band kicking ass.

After the show ended, we got the drums out of there, and I needed to load them up in a vehicle while Dave chatted with lots of adoring fans. This is like the world’s hardest game of Tetris. There is a very specific order to which thing goes in the car, and I always screw it up. Despite the gear being rugged, there are still fragile points on a drum set and it’d be a shame to scratch one of the shells. There you have it!