Here’s something I’ve been meaning to do a writeup on for a while now. About four or five years ago, I decided I was going to play the drums. Now, by that point in my life, I had already realized I possessed the hand-eye coordination of a cantaloupe. Nay, a cantaloupe that has Down syndrome and has suffered a stroke. Anyone within earshot of me playing an acoustic drum set would suffer a fate far, far worse than any Guantanamo detainee ever did. Under threat of U.N. sanctions, I decided I would do the world a favor and buy an electric drum set and practice with headphones. I went down and picked up a Roland TD-6S.

Now, this was a good little drum set, but the weaknesses of an electric set are realized fairly quickly. Problem 1: they have all the aesthetic value of a worn black leather boot humping a power transformer. Problem 2: the pads are small and aligned oddly. Roland designed the kits to have a layout similar to one an actual drum set would have, but it is never quite the same. Long story short, it’s really hard to have delusions of being an awesome rock star while playing one of these electric kits.

Pretty damn hard to look cool while playing this.

Around the same time I was getting a bit frustrated with the dorky electric set, I found out you could take an acoustic set, gut it, put some magical shit inside, and have it work like a silent electric set. Hell yeah! Now that’s what I’m talking about. I could still practice without bothering people, and look and feel cooler doing it. It was officially on. I bought a nice looking black Tama superstar kit for my conversion. In hindsight, I probably should have gone for an even cheaper drum set, but oh well. 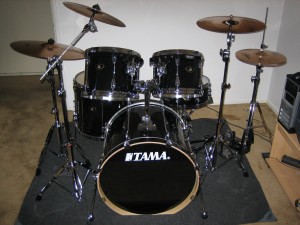 My Tama drum set before I converted it.

So, step one was understanding what the hell turned me whacking some random pad into sounds that came out of a little magic box. Turns out it is all about the “piezo.” Piezos, as far as I can tell, are magical relics left by elves of the middle ages. If you whack them, they turn the whack into electricity. If you shock them, they move. It’s crazy, really. I implore you to read all about them. Unfortunately, the piezos are a bit fragile. Smacking them with a drumstick is pretty much guaranteed to break them, so you need something to dampen the blow. In electric drums, this is often done with a foam cone. The tip of the cone touches the drum head, and the cone sits on top of the piezo. 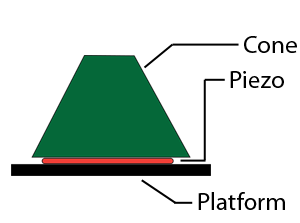 A diagram of the cone assembly.

Piezos solved the problem of how to turn my drum stick hits into something that can be interpreted by my magical drum computer. However, I still had the problem of getting them in the drum and making the drum silent. Let’s start with mounting the cone assembly in the drum. Most drums have a lot of little screws inside them that hold the lugs on.

The inside of my snare with lots of little screws useful for attaching things to.

A little creative (or not-so-creative) metal work and I had things all attached and set up. I have a slotted bracket on each side of the drum that is held to the drum shell by the lug screws. I then have a bar that runs the length of the drum attached to the brackets. Sitting on the bar is my cone assembly. On most drums, I also wired four more piezos to the shell so that I can detect when I hit the rim instead of the drum head (or both at the same time). 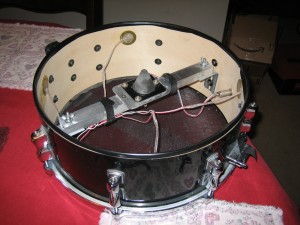 Here is the snare with the electric components all mounted inside of it. Note the snare wire serves absolutely no purpose here.

Next, making the drum silent. Turns out, this is fairly easy. Drums make noise because striking the drum head causes a big burst of air to travel down. It’s the same way a speaker cone moves and makes sound. Poke enough holes in a drum heads, and the air will just escape out the top or bottom and you won’t get much sound at all. It’s like knocking on the screen part of a screen door versus knocking on a nice hollow wood door. In fact, that’s almost exactly how we handle it with drum heads. One can buy “mesh” drum heads. They’re basically screen door material that is stretched really tight. You hit them, and it moves the cone and triggers the piezo. But, the air escapes easily so it produces very little sound. There are a handful of brands of mesh drum heads one can purchase. The best ones are made by Roland, but they really dislike people doing these sorts of projects and have stopped selling most of the mesh head sizes needed for a kit like this. 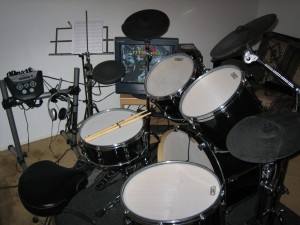 Acoustic kit after converting the drums to electric.

I converted all of my shells to electric drums and thus completed the first phase of my acoustic to electric conversion. I could have stopped there but I wasn’t satisfied yet. It worked pretty well, but it could be better. The first thing I was really unhappy with was the cymbals. Especially that lame TD-6 hi-hat setup. I found a company called Smartrigger that made these incredibly realistic looking electric cymbals. I thought I would give them a try. 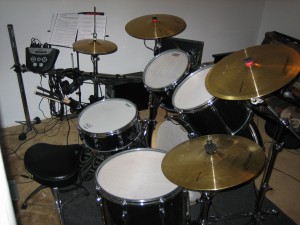 The acoustic to electric drum set with the Smartrigger cymbals.

As you can see, the Smartrigger cymbals looked nice. There was a problem though. They kept breaking almost immediately. I sent one back for repair and the company even made me pay for shipping. A week after I got it back, it broke again, and soon after that, another broke. I said screw it and cut my losses. I was done with that company. I decided to go with Roland for my cymbal needs.

The almost final layout of my acoustic to electric set.

The Roland cymbals were a little more lame looking, but they triggered better and wouldn’t break on me. At the same time, I replaced my TD-6 module with a TD-20 and built this awesome audio rack. As far as an authentic feel goes, nothing in the electronic cymbal realm beats the VH-12 hi-hats. They trigger beautifully and use a standard hi-hat stand. 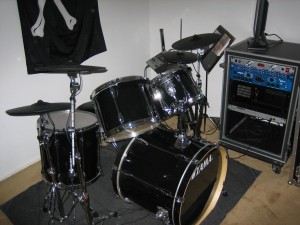 From the front, it still almost looks like an acoustic set!

Kit mostly complete (my current setup has one extra cymbal), I started learning of all the cool things an electric kit allows me to do. Beyond practicing without pissing off everyone around me, I’m also able to play DTXMania. If you’ve ever played the drums in the video game Rock Band, then you kind of know what DTXMania is. However, it much better because it uses my much more realistic feeling set and allows for more triggers than Rock Band does. 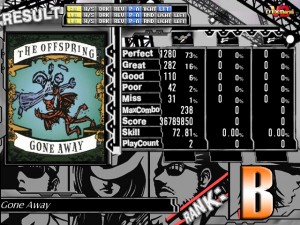 A DTXMania scoring screen after playing a song.

So that’s the story on my electric drum set that looks like an acoustic one. If you want to learn a whole lot more about these sorts of acoustic to electric conversions, check out the VDrums.com forums. Aside from tutorials on how to build one of these things, they also have product reviews on mesh heads and just about any other kind of information you could want relating to electric drum sets.